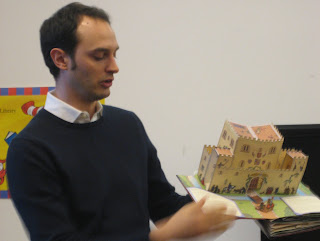 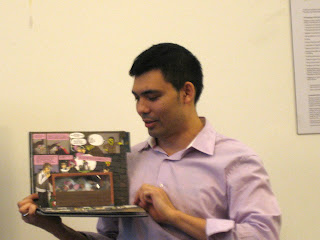 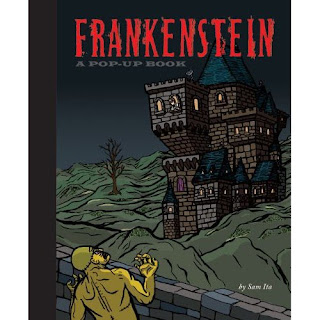 The Children’s Literature Salon at Children's Center in the main branch of the New York Public Library this past Saturday was a wonderful success. It was a packed room despite competing with a warm sunny day as Elizabeth Bird kindly ushered us through about a dozen questions touching on our backgrounds, inspirations, and the pop-up creation process. Sam Ita was in a jovial mood as he described how he came from humble beginnings as a pedicab driver and luggage salesman before answering a newspaper ad to work at a pop-up studio. Legend has it that he expected to design pop-up ads on the computer before he took a good look around and realized they made books.

Once I discussed some ideas behind my pop-up books Castle and Baby Signs, Sam displayed his latest title, Frankenstein. I was delighted to learn more about the various versions he created to tell the occasionally gruesome story. Sam even touched on the fascinating idea of free will as he described the automatic pop-up movements of the Monster versus the viewer activated pull tabs that brought the townspeople’s actions to life.

After we shared our personal stories and showed our latest pop-up titles, Sam brought out some interesting early prototypes of his newest pop-up books as the audience swarmed in for a closer look. In fact, the book lovers were so excitable that when two pop-up books were offered as a prize to the member that produced a winning note from under their seat, dozens of folks mistakenly tore off the product labels of the fabric chairs and waved them triumphantly in the air. With colleagues and pop-up fans like these, I could not think of a better place to be.