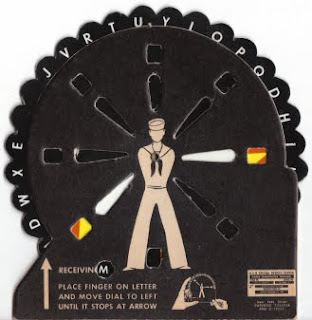 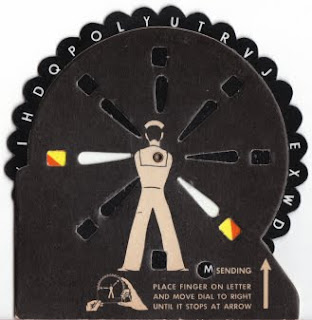 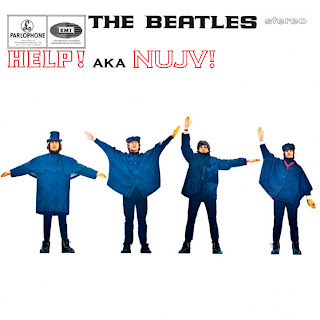 The Semaphore trainer is intriguing and especially effective as it utilizes both sides of the movable wheel in training aspiring flag wavers. If you are receiving a message than you spin the dial until it matches the hand positions presented by a faceless seaman, thus decoding a single letter. Flip the card over and line up the letter to learn the correct gestures to send your message.

For the landlubbers among us, flag semaphore is a method of communicating over a distance by means of visual signals with hand-held flags. Semaphore has been used in the maritime world since the early 19th century, but the term is from the ancient Greek for “sign bearer”.

While I may not have any immediate use for this trainer I was able to put it to the test in decoding the Fab Four figures on the front of their Help! album (which was also coincidentally created in 1965). I thought I had stumbled upon an early clue to who was the walrus, but it turns out they are calling out Nujv! since the producers didn’t like the original hand positions. We may have been tricked by the Beatles, but at least we can be confident able the origins of the peace symbol. A synthesis of the semaphore symbols N+D, which stands for nuclear disarmament. Peace.