On March 21, 1952 screaming rock and roll fans broke through the gates at the Cleveland Arena to be a part of one of history's first rock concerts.  The event was called the Moondog Coronation Ball and was hosted by disk jockey Alan Freed and radio station WJW.  It's recognized as one of the first rock concerts because at that point in history, no one had heard of a "rock concert".

With the help of massive ticket counterfeiting and possibly overbooking on the part of the event's sponsors and estimated 20,000-25,000 fans came out for the rock concert.  The Cleveland Arena's capacity was only 10,000!  Thus the event was canceled after the other 15,000 fans broke through the gates. 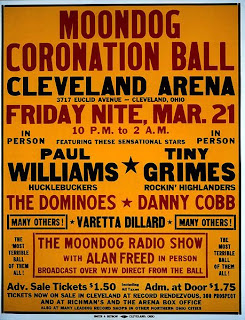