It’s The Thought That Counts

I was able to catch one of my favorite artists last week during the closing days of a month long exhibit at the Perry Rubenstein Gallery in Chelsea last week. Peter Callesen is no stranger to the folks here at the studio. We have received many email forwards regarding his marvelous work in the years past and even featured him on Robert’s website a while back. 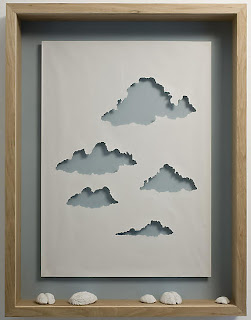 This show, titled ‘Folded Thoughts’, focused on less than a dozen recent works, all of which almost carried a dream like quality. One of my favorites new pieces is ‘Five Forgotten Thoughts’ where the paper that was cut out to create the cloud shapes in negative space were used to form the intricately molded brains. This more intimate work (and an amazing apple representation) really stole the show from the more eye-catching skeleton formed on a life-sized scale. Decide for yourself when you check out the slideshow from the Perry Rubenstein Gallery and keep up to date with the Peter Callesen to see if he is coming to a gallery near you.

In the 1970s Bill Brand, a young artist and filmmaker, set out to create a zoetrope inside the New York City subway (A zoetrope is one of the earliest moving picture device shown below). He approached the Metropolitan Transportation Authority about this motion picture and the MTA approved! Hooray! This zoetrope was named "Masstransiscope". This was also before MTA's Arts for Transit program, so as a part of the NYC art history "Masstransiscope" is one of the first official underground pieces of art! 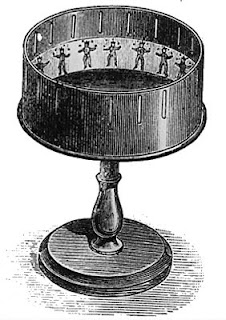 The piece of art is one long light box next to the subway track (I believe the Q and the B trains going into Manhattan). There are slits and paintings on the light box to create panels or stills. And because of the moving train, the images begin to move!

From the 1970s through the 1980s millions of strap hangers experienced "Masstransiscope". Now after nearly 2 decades of decay and layers of graffiti it has been restored to its original state!

You can see the zoetrope here:


I have yet to see this masterpiece on the Q/B trains, but I'll make a special trip to see it!

These aren't your ordinary paper snowflakes

Last year I (accidentally!) stole Kyle's Kirigami Day Calendar and had a lot of fun with it, so this year I got a new one of my own! Every day has a different thing to fold and cut. I have a bunch of the best designs pinned up around my desk here in the studio. 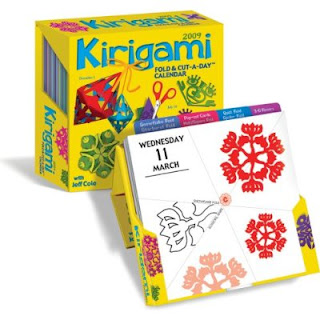 What's more, I'm a big origami fan, so whatever I don't cut, I can fold into whatever I want.

Rumble in the Jungle

This is a wacky book called "La carrera de la selva", (The race of the jungle). I found it in our extensive pop up library. It was made in 1967 by George Pavlin and has beautiful 60's illustrations. 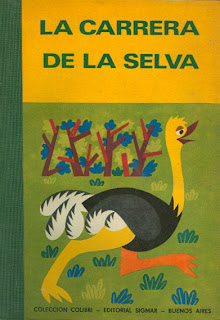 All the animals in the jungle have a big race to decide…something. I haven't really finished it yet. My Spanish is so so. 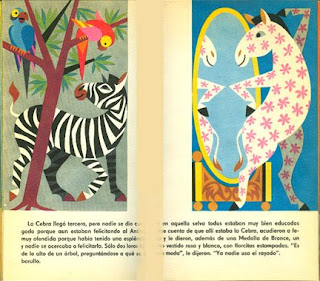 The pops are really simple but it works very well with the graphic style of the art. 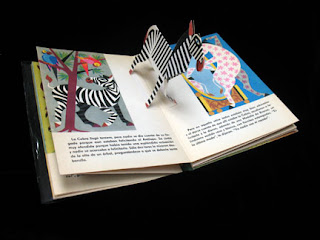 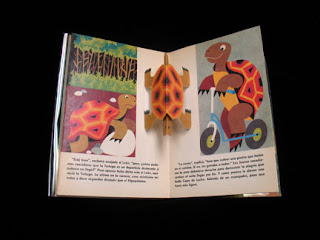 I will let you know who wins the race when I find out.
-Simon
Posted by PopUpStudio at 6:21 PM No comments:

I am a big fan of comic strips like Calvin and Hobbes and Krazy Kat, but in my opinion, the best one is Pogo by Walt Kelly. 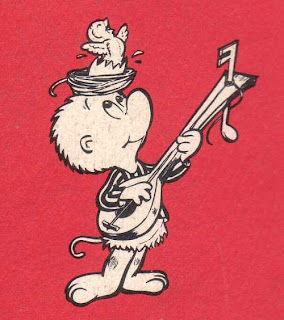 As a young man, Walt Kelly worked as a cartoonist and reporter in Bridgeport, Connecticut before moving to California to work for Walt Disney from 1936 to 1941. While there, he contributed to Snow White and the Seven Dwarfs, Fantasia and Dumbo, among others. Later, he began his main career as a political cartoonist and comic strip artist. In Pogo, he combined political satire, social commentary, beautiful artwork (with brushwork influenced by his time at Disney) and slapstick comedy into a masterpiece that spanned 27 years.

You can read some Pogo strips at the official website:
http://www.pogopossum.com/

And more about the strip on wikipedia:
http://en.wikipedia.org/wiki/Pogo_(comics) 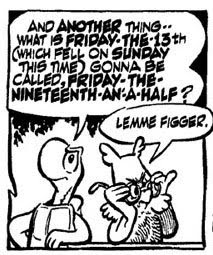 P.S. Look out Churchy, Friday the 13th lands on a Friday in both of the next two months!
Posted by PopUpStudio at 5:18 PM No comments:

Out on the west coast, Gallery Nineteen Eighty Eight is hosting 'Under the Influence: The Official Art Tribute to Beastie Boys'. 100 artists, 100 pieces all paying tribute to the Beastie Boys! Either inspired by snippets of lyrics, music video images, and/or pictures of the band art was created!

Check out the link of the gallery:
http://www.nineteeneightyeight.com/entry/home.html

For you illustrators and lovers of music, this Beastie Boys gallery show is for you! And those on the west coast, definitely go check out this show (it ends this Thursday!) 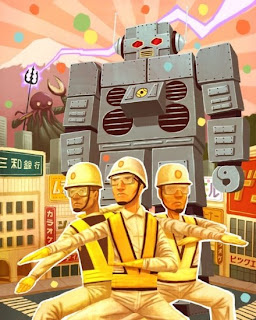 xo!
Jess
Posted by PopUpStudio at 11:17 AM No comments:

Our publisher Candlewick Press sent two large packages to the studio this week. We get a lot of deliveries to our door, but we get extra excited when they are from overseas addresses. Everyone streamed out of the offices and clawed at the boxes like it was Christmas morning. Robert always hopes they contain pounds and pounds of chocolate, but this time it was our book, ‘Fairies and Magical Creatures’ in almost a dozen foreign languages. That is almost just as good! This studio has been fortunate to have many of the titles translated into many different languages, but we often never learn of the results. Very few folks in America get to see how our books look in translation so I created a mosaic of covers for you to enjoy. Let’s see if you can match the covers to the countries: 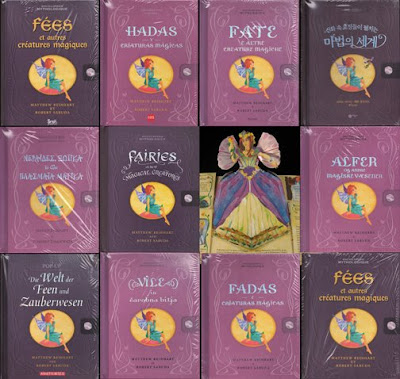 It’s funny how the color of the cover changes with different countries. My favorite is the Korean version with the additional fairy in the upper left.

- Kyle
Posted by PopUpStudio at 9:58 AM No comments:

This week the studio received a copy of “Visionaire 55”. “Visionaire” is a multi-form album of fashion and art produced in limited edition of 4000. Only published three times a year, this holiday issue as the theme of ‘Surprise’ and houses 12 pop-up portfolios in a large dark purple cloth-covered case that has a very inventive magnetic opening device.

One of my favorite artists, Cai Guo-Qiang, is represented here in a pop-up devised by Bruce Foster. The single spread references a large scale installation called ‘Head On’ that I had the great pleasure to see last year at the Guggenheim Museum. I got a great kick out of seeing the arching wave of wolves twist and curl across the page. 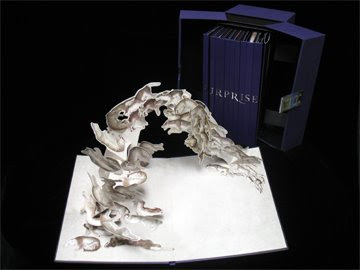 There are many other excellent pop-up compositions to be found inside the collection. So be sure to visit the website below to learn more about this creative publication.

As the mail was delivered today, we at the studio were blessed with a gift. A Martha Stewart Living magazine! And not just any issue, one filled to the brim with CUPCAKES! And we love cupcakes here in the studio! Check out the awesome cover of simple cupcakes with shades of icing! Just for color alone the cover is a standout (and I'm pretty sure they taste yummy too!). Take a look at these two choice ones: a hedgehog and a bee on a flower cupcakes! They're so fantastic! Little pieces of art. A few of us then decided that if we weren't pop-up makers we'd probably be bakers... I mean Robert has the plan all drawn out in a previous blog post! 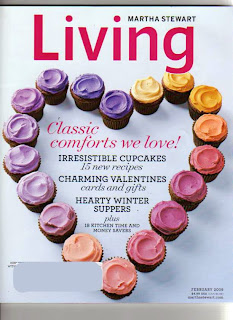 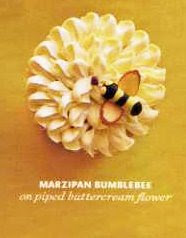 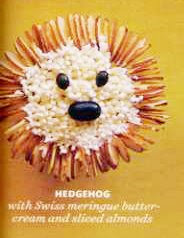 Let us eat cake!
- Jess
Posted by PopUpStudio at 6:29 PM No comments:

Another favorite illustrator of mine is Edward Gorey (sometimes they laugh at me in the studio because it seems that all illustrators are my “favorites”). My first exposure to his beautiful drawings was actually not through a book, but through the opening titles for “Mystery!” on PBS. This animation is a classic exemplification of his illustrative style and subject:

Needless to say, I was very excited when I discovered a 1982 Edward Gorey pop-up book on our studio’s shelves! Take a look! 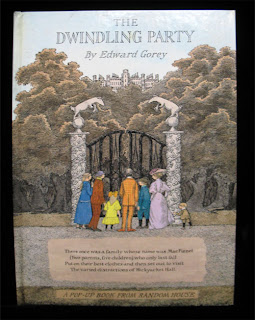 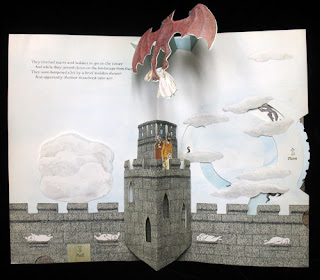 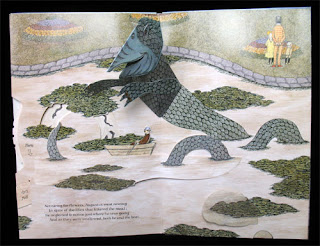 Hello again,
I haven't written in a while because of the holidays and whatnot. I just wanted to show a series of photos I think are really powerful and beautiful. They're from the photographer Pieter Hugo of men in Nigeria and their pet Hyenas. Pieter followed the group for a two weeks and learned about their relationship to the animals and the community. 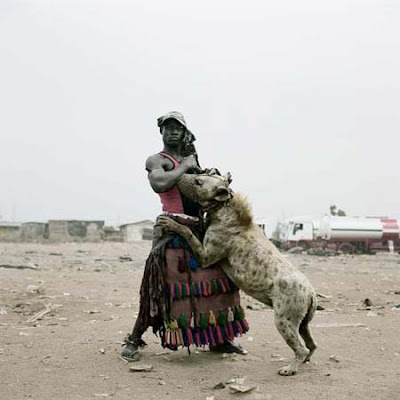