Going to the Library 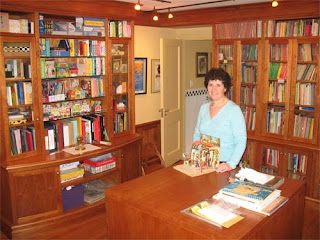 I was fortunate to visit Ellen Rubin this week and get a chance to see her newly completed library. Known around the world as The Pop-up Lady, she is an avid collector that has amassed a remarkable collection of movable books and ephemera. Ellen also shares her pop-up treasures through her writings, lectures, and exhibits that she has helped curate.
Faced with countless fine examples of movable books spanning hundreds of years, I asked Ellen to display some of her favorite pieces from the turn of the century. With a knowing smile she produced delicate volvelles and Nisters, McLoughlin titles and Meggendorfers; all within arm’s reach. Robert warned me that the visit to such a prestigious collection could be overwhelming, and the hours slipped by before we could move beyond a few bookcases. In fact, I almost missed my train home, because I was so engrossed in investigating some of her beloved Kubastas. Luckily, I made my train with moments to spare, vowing to return for a longer visit (and next time I’ll set an alarm!)

Check out her wonderfully informative website and be sure to view the animated images section featuring one of my favorite Meggendorfer scenes.

The American Design Club is having its second show tonight at a store called The Future Perfect in Williamsburg, Brooklyn. It’s the "Hue are you" color show, showcasing new design based on color. It will be open until April 20th, so if you are in the New York area, check it out!

Today is the first day of Spring! I have been waiting for this day ever since the first day of Winter. Imagine my surprise when I tore open the curtains this morning to see…snow! It seems ‘old man winter’ wanted one last laugh before he exits (and I hope this is the last). The feeling of getting caught off guard reminds me of an antique movable postcard I recently acquired. Roll your mouse over the image below to share in the surprise.

- Kyle
Posted by PopUpStudio at 6:18 PM No comments:

There seems to be some disagreement about whether this video is real or not. Personally, I hope it is.

Even if it's not real, though, it's a pretty great idea...who thought to make large-scale animations...with sheep?!

-Shelby
Posted by PopUpStudio at 6:06 PM No comments: 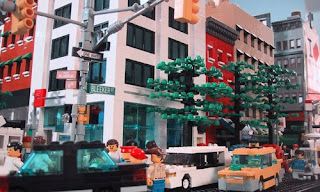 Last week my computer here at the studio crashed, and I lost everything on it. Including my web bookmarks! So I was looking for an old bookmark through google, but I stumbled upon something even cooler! Check out this guy's website:

Sean Kenney creates pieces of art with Legos! And really, they're all amazing. My favorites on his site are the New York City models. There's even a Starbucks! HA! Kyle also just informed me that Mr. Kenney did a piece for Stephen Colbert!

This makes me want to bring out the legos and build some forts.
Jess
Posted by PopUpStudio at 6:04 PM No comments:

It’s Friday the 13th so I thought I would post something freaky.

One of the most buzzed about events at the recent Frankfurt Book Fair was Metaio’s demonstration of their augmented reality book titled “Aliens & UFOs”. This regularly printed flat book burst into three dimensions when viewed through a standard webcam.

While this technology will not replace our beloved paper engineered books any time soon, I think augmented reality can be used in very creative ways. Check out this video for a preview of the next generation of nautical advertisements. 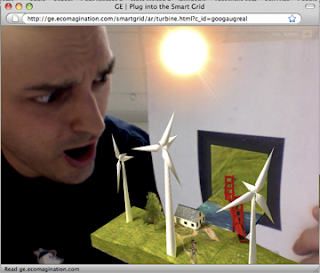 Test augmented reality out for yourself at the well-designed General Electric website. All you need is a printer for the card, a webcam for viewing and a microphone to add wind to the virtual scene. 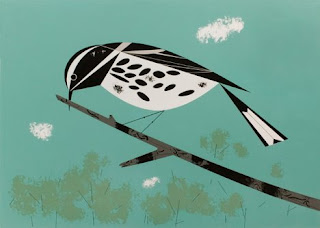 "When I look at a wildlife or nature subject, I don’t see the feathers in the wings, I just count the wings. I see exciting shapes, color combinations, patterns, textures, fascinating behavior and endless possibilities for making interesting pictures. I regard the picture as an ecosystem in which all the elements are interrelated, interdependent, perfectly balanced, without trimming or unutilized parts; and herein lies the lure of painting; in a world of chaos, the picture is one small rectangle in which the artist can create an ordered universe." - Charley Harper

Every single work I've seen by Charley Harper is well designed, carefully composed and beautifully colored. Some of his huge body of work is featured in Todd Oldham's book, "Charley Harper: An Illustrated Life". The book is beautiful (and massive)! Below is a biographical video Todd made shortly before Charley died a few years ago:

Posted by PopUpStudio at 6:26 PM No comments:

I Prefer Pictures in My Novels

It's hard to pin point the exact era graphic novels were created because man has been telling stories since the prehistoric eras. Though, I did find out that the first major publication of a graphic novel was in 1842 'The Adventures of Obadiah Oldbuck' humorist Rodolphe Toffler which appeared in a weekly humor magazine.

Recently I've been reading graphic novels (they have the best of both worlds--words & pictures!) and just finished devouring 'Fables: Vol.1' written by Bill Willingham and illustrated by Mark Buckingham and Steve Leialoha. Excellent volume and I'm now sucked into the story... thank goodness there's 12 volumes! 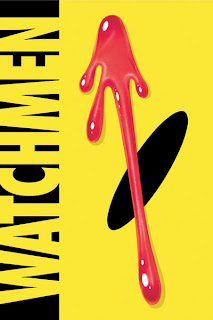 But what really sparked my interest in graphic novels was the first one I ever read: Alan Moore's 'Watchmen'. It was circulating around the studio and once I picked it up, I couldn't put it down. It's such an intriguing story built up layer by layer, with supplemental pieces of literature within the novel (for example a police report, newspaper clippings, etc.), smaller plot lines woven in the main story. It simply was THRILLING!

Not only the story is captivating, but also the illustrations are what kept me turning the pages. Dave Gibbons' work was phenomenal! I felt as though the characters moved from panel to panel even though they sit within the inked boxes. I think some illustrators may struggle with this, but Mr. Gibbons has tackled it and won in 'Watchmen'.

You can safely say that once 'Fables' has come to an end, I will be searching for more of Mr. Moore's work and Mr. Gibbon's as well. 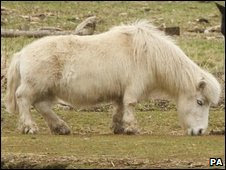 Mayflower, a horse with a few shortcomings, is making a lot of commotion in Hampshire, England.

It's good to know strangers will call the proper authorities if they think your horse is stuck in the mud.

- Simon
Posted by PopUpStudio at 5:53 PM No comments: 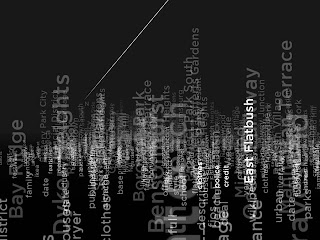 I love information design, so I was pretty excited when I came across this cool application (alas, it requires an Intel processor, but there's a video preview that shows you around) that takes live keyword updates from blog posts and makes a cool virtual map that you can explore.

The creator, designer Christian Marc Schmidt, writes on his website:
"Pastiche is a dynamic data visualization that maps keywords from blog articles to the New York neighborhoods they are written in reference to, geographically positioned in a navigable, spatial view. Keywords are assigned based on relevance and recency, surrounding their corresponding neighborhoods. The result is a dynamically changing description of the city, formed around individual experiences and perspectives."

Pretty cool!
-Shelby
Posted by PopUpStudio at 10:24 AM No comments:

Popping up on TV

One of my students at Pratt Institute alerted me to the cool opening sequence of the new series called “the United States of Tara” on Showtime. Now we all know that it was digitally created, but the designers where pretty faithful to the physics of paper engineering. It has a nice flow to it and the art works very well with the media. The whole segment is a class act and has me intrigued about this show. Plus it was created by Diablo Cody (of “Juno” fame) and stars the very capable Toni Colette as a woman coping with her dissociative identity disorder and dysfunctional family. Throw in the ever-lovable John Corbett and this one could be a winner.

Tasty Treats from the Future

I have made it back to the present from the future! Last week I traveled to Shanghai, China to go on press for this year's MoMA line of cards. It was my first time in this very metropolitan city and I was quite overwhelmed with all the construction. Supposedly Shanghai is home to 1/5 of the world's construction cranes! 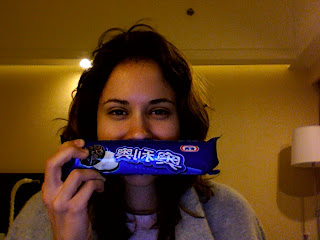 And can you guess the delicious goodies in this photo?


Till next time, fellow time travelers!
Jess
Posted by PopUpStudio at 6:17 PM No comments: