I was recently re-admiring some artwork by a friend of mine from school and I thought I would share some of her work. 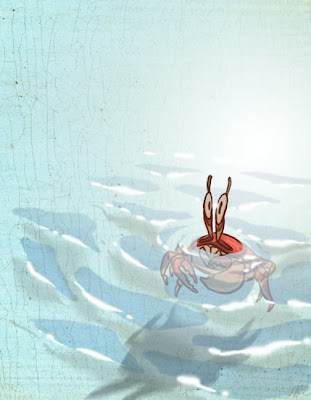 Jessica Plummer loves dinosaurs, hence her nickname: the Blue Raptor! Ever since our first class together in freshman year (it was a 6 hour long drawing class: pretty much bootcamp for artists) I've been blown away by her excellent understanding of anatomy, beautiful sketching style, and fun subject matter in her illustrations. Check out her website and her blog (the blog is updated often)!
-Shelby
Posted by PopUpStudio at 6:15 PM No comments:

So this week finds me with 10 freshly hand printed tote bags that will be in a new store called Design-to-Go!

Design-to-Go is a pop-up shop near Port Authority in NYC.  The concept behind pop-up shops is that they literally pop-up out of nowhere and are not permanent.  There have been many successful pop-up shops around the nation such as Target, Suave, and Havainas pop-up shops.

Design-to-Go is a pop-up shop dedicated to the theme of travel and will be carrying items from mainly local artists (like yours truly).

So if you're in the New York area, stop by and support local designers!  And check out the article New York Times published: http://www.nytimes.com/2009/ 08/13/garden/13open.html?_r=2& ref=garden

-Jess
Posted by PopUpStudio at 5:55 PM No comments:

I was recently reading an article in the L.A. Times from 2002.  Yeah, that’s right 2002 – I’m catching up on the backlist.  A Career That’s Still Unfolding by BettiJane Levine chronicles the work of Waldo Hunt, the legendary pop-up entrepreneur that by many accounts single-handedly ushered in the Second Golden Age of Pop-ups starting in the late 1960’s.  Wally Hunt is the man responsible for creating Intervisual Books Inc., which was the premier novelty and pop-up packager for decades in the United States.  Almost every major paper engineer has either works for or with Intervisual on creating some of the most outstanding examples of pop-ups.  (I almost landed a job with them in 2000, but was unable to make the transcontinental relocation.) 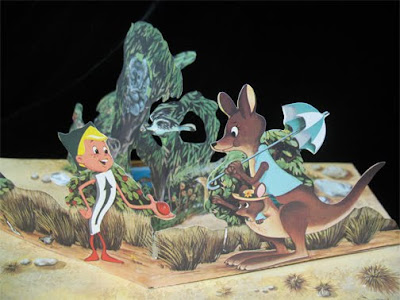 I’m a total nerd about pop-up history so when I learned from the article that the first promotionals created by Wally Hunt’s earlier company, Graphics International, was a series of pop-up ads for Wrigley’s gum in the mid-1960’s, I had to do some digging.  There were a total of 14 separate pop-up ads in the series focusing on a different animal in the “Wrigley Zoo”, which appeared to be an animated television series.  There is virtually no information on the program but it may have been linked to the Captain Kangaroo series.  Like many cartoons of today, this show was a thinly veiled attempt to sell products.  I was able to come across a transcript of a Wrigley Zoo TV advertisement from the 1960’s on UK television.   Check out the catchy lyrics below:

Let’s take a trip to the Wrigley zoo,

When you talk to the animals they talk back.

let’s hear what Melvin has to say:

“My mummy says I should realize

That monkeys all need exercise,

But teeth need exercising too

And my mum makes it fun to do,

For when I swing she gives me some

It helps to keep teeth clean and bright

And never spoils my appetite.

My mum’s my favourite swinging chum,

Mr. Hunt claims that each ad was a run of 1 million making this a huge campaign.  The single spread pop-ups were attached to national magazines like Jack and Jill via a small flap that was removed from the binding in order to remove and open the advertisement.  Due to such a high volume of ads printed these pop-ups are not too uncommon and I have been able to collect seven of the series.  “Melvin Monkey” is good but my favorite of the bunch is “Karol Kangaroo”.  Despite the fact that I’m a big Aussiephile, this pop-up stands out from the rest of the series since it does not use any glue tabs to create the pop-up scene but instead uses fold-overs and slotted tabs into the basepage.  The rock behind the boy’s head is one example of these slotted tabs.  It’s an interesting solution to manufacturing a high volume of movable spreads and it’s curious that this is the only one I have that uses this technique.  Hopefully I can collect the remaining seven pop-up ads to compare the full series to this one.  And that is where you, dear readers, come in.  Can you help identify the missing three animals?

Drop me a comment if you can fill in the blanks on the pop-up ads or TV shoe and be sure to savor this monster blog post like a delicious stick of Wrigley’s gum as I will be out of commission for a bit while I enjoy the last gasps of summer.

Posted by PopUpStudio at 5:47 PM 6 comments: