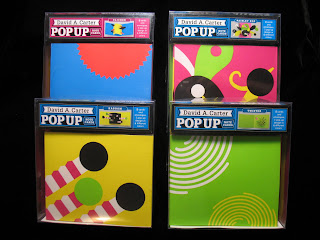 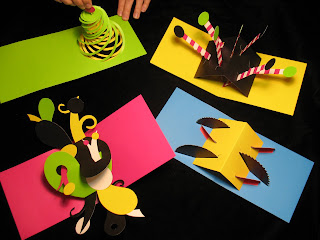 David A. Carter is no stranger to this blog. I have tremendous respect for the man and he is a delight to be around. The studio recently came across an assortment of his pop-up cards and they were quickly snatched up. These 5” x 6” cards were designed in 2008 and published by Clarkson Potter (better known for their cookbooks and lifestyle titles) and produced by Millenium in China. I believe there are eight different designs with names like: Dots & Spots, Curlycue, Blossoms, Wave, Kaboom, Clicker, Paisley and Twister. Many of the compositions will be familiar to fans that followed the One Red Dot series. Each set contains a single design in four different colors printed on eight cards with colored envelopes. The cards have a universal appeal and are wordless, which allow the pop-ups to be used in a variety of occasions. The packaging mentions that the designs are influenced by the works of Matisse, Calder and Gehry among others and remember to pester him more about some of the hidden meanings and inspiration in his work. It also notes that David has authored over 70 pop-up books, so it looks like I have to start looking into more of his back catalog and find some of his earlier works, which may show up on this blog in short order.

Hello, I'm looking for pop-up card makers in Dubai for invitations for my engagement and then wedding. Would you know anyone in your network who can create these for me?
For instance, for the engagement, i wanted pop-up rings coming out...
Best,
Jasmine

Jasmine,
At this time we don't know of any paper engineers in Dubai, but that does not mean they're not out there! Best of luck! ~Jess