Nomura's Jellyfish (Nemopilema nomurai) is a very large jellyfish that was discovered to be a new species in 1921.  The average diameter of a Nomura's Jellyfish is 6.6 feet and they weigh up to 440 pounds!  They primarily live in the Yellow Sea and East China Sea.  Though because of global warming these jellyfish (well, most jellyfish in general) are starting to inhabit more of the ocean, including the North Seas, Mediterranean, and Chesapeake bays. 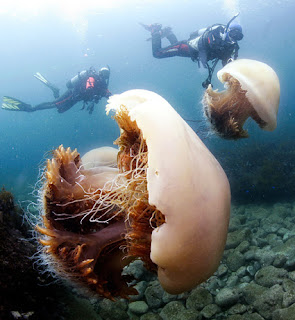