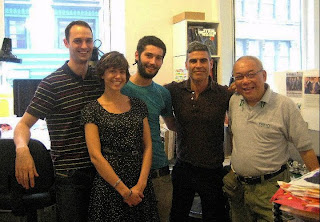 A surprise guest dropped by the studio last Friday after a long delayed flight from Manila, Philippines. Pop-up collector and advertising guru, Adie Pena was in New York for one of his biennial visits to the States. It had been years since we last met at the Movable Book Society conference in Washington D.C. and I was eager to hear what Adie has been up to. It looks like he is busier than ever as teaching three advertising courses at the De La Salle -College of Saint Benilde, as well as helping with a local theater production that involves a dress that unfolds over the entire stage as figures appear like pop-up elements.

Adie has been collecting pop-up books and movable advertising for over 18 years and is known as one tough critic of paper engineering but we were able to get a some smiles out of him with a few sneak peeks of our upcoming projects like Puppies and Rescue. We hope that he enjoyed the city during the wonderful weather this weekend and his return flight was smooth enough for him to concentrate on his other passion, anagrams.