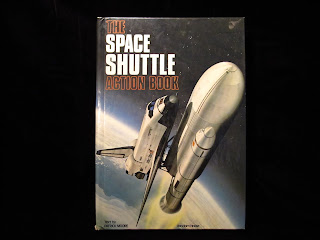 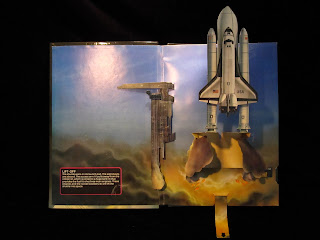 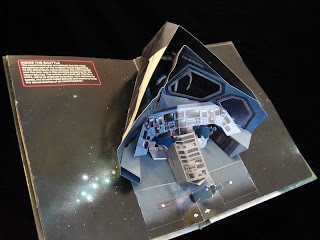 Vic Duppa-Whyte was out of this world. He was a gifted paper engineer in England that created some of the most inventive pop-up designs in the 1980’s. In fact, David Carter and other folks that worked with him through Intervisual Books noted that Vic’s creations were so advanced at the time that they could not be produced. Luckily, there is a half dozen titles were released that bare his name. All of them are amazing. Today we check out the The Space Shuttle Action Book from 1983. Published by Random House and produced by Carvajal in Columbia, this introduction to the space shuttle houses many inventive pop-ups.

The NASA space shuttle program had just begun when the book came out and Vic does a great job right out of the gate with creating the excitement of exploration of space. As we open the first page, one pulls a tab and the anticipation builds with a four second countdown before the rockets fire and the pop-up shuttle lifting off the page. Another clever construction is a pop-up cockpit complete with functional joystick that changes the forward view as the shuttle tilts left or right with the aid of a single black thread.

The space shuttle program may be ending this year, due to soaring costs and privatized ventures, but this book will continue to send me to the moon for years to come.