The Beatles made their first trip to the United States on February 7th, 1964.  Thus "Beatlemania" also arrived in the states-- they were greeted by 3,000 screaming fans and just about started a riot at the airport.  The Beatles had just had their first number 1 hit six days earlier with "I Want to Hold Your Hand".  Two days after arriving in New York City, the band appeared on the Ed Sullivan Show where it is estimated that 40 percent of the U.S. population tuned in to watch! 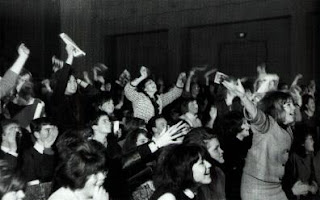