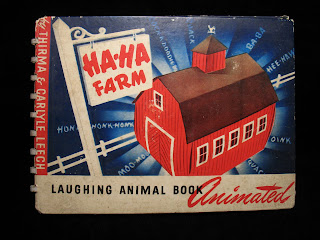 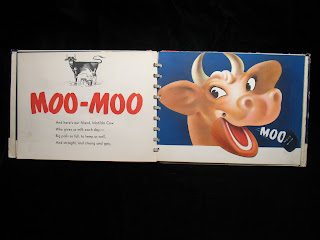 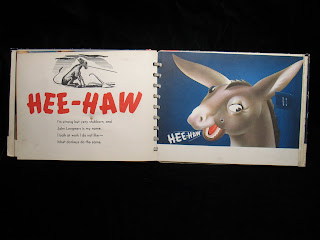 I learned about Carlyle Leech when I came across the 1943 release of the Hide and Seek Riddle Book a while back. Carlyle was a children’s book creator that was most prolific in the 1940’s. In 1944, he teamed up with his wife, Thirma, to create Ha-Ha Farm, which is advertised as an animated laughing animal book. That is exactly what we get here. I must confess that I purchased this more for the disarming illustrations than the mechanics. The format is a tried and true pairing of rhyming verse and movable element. In this case, a popular farm animal is caused to “laugh” at the swing of a single pivot rocker tab. I wish there was a sequel called Ha-Ha Safari, so I could see the hyena in action. My favorite farm animal is the cow that rolls the whites of her eyes when uttering a jolly “Moo” as if she was reminded of the classic joke. Q: “Why do cows wear bells?” A: “Because their horns don’t work.”

Looks like new generations can get in on the fun because the Laughing Elephant published a reprint of the book in 2009. No joke.