On February 2nd in 1887, Groundhog Day is celebrated for the first time at Gobbler's Knob in Punxsutawney, Pennsylvania.  Groundhog Day has its origins in ancient European weather lore, wherein a badger or sacred bear is the prognosticator as opposed to a groundhog.  German settlers in Pennsylvania continued the tradition but with groundhogs, which are plentiful in the Keystone State.

The holiday is similar to the ancient Christian tradition of Candlemas Day, when clergy would bless and distribute candles needed for winter.  The candles represented how long and cold the winter would be.  In Scotland the tradition may also derive from an English poem:

According to tradition, if a groundhog comes out of its hole on this day and sees its shadow, there will be six more weeks of winter weather; no shadow means an early spring.  And this year, Punxsutawney Phil did not see his shadow!  Hooray for an early Spring! 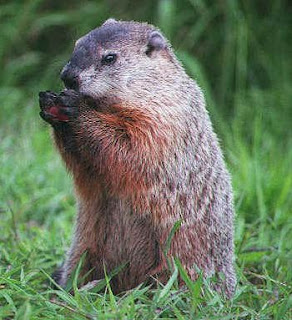