On April 21st, 1908 the German war pilot known as the Red Baron was shot down and fatally wounded near the French city of Amiens.  Manfred Albrecht Freiherr von Richtofen earned the nickname "Red Baron" because he shot down over 80 opponents over the course of his career and usually flew in a plane that was painted red.  The German propaganda machine capitalized on Richtofen's victories to energize the war effort and spread (sometimes) exaggerated stories of his exploits.  He is considered the ace of all aces of World War I and is perhaps the best known pilot of all time.

He was so respected, even by his enemies, that when he was shot down the allied forces organized a full military funeral for him and buried his body in a cemetery at the village of Bertangles.  In 1925 his brother Bolko came and took his remains back to Germany.  Through numerous books, movies, and pop-culture references he remains a well-known historical figure to this day. 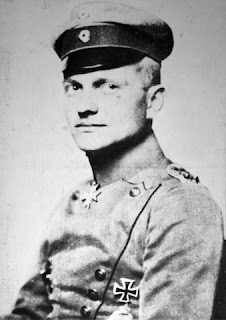