On April 6, 1896, the Olympic Games were reinstated in Athens 1,500 years after being banned by Roman Emperor Theodosius I as part of his efforts to suppress paganism in the Roman Empire. At the opening of the 1896 Athens Games, King Georgios I of Greece and a crowd of 60,000 spectators welcomed athletes from 13 nations to the international competition.

The first recorded Olympic Games were held at Olympia in the Greek city-state of Elis in 776 B.C., but it is generally accepted that the Olympics were at least 500 years old at that time. The ancient Olympics, held every four years, occurred during a religious festival honoring the Greek god Zeus.

The 1896 Olympics featured the first marathon competition, which followed the 25-mile route run by a Greek soldier who brought news of a victory over the Persians from Marathon to Athens in 490 B.C. Appropriately, a Greek, Spyridon Louis, won the first marathon at the 1896 Athens Games. 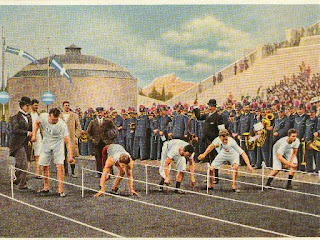