On January 25th, 1905 a 3,106 carat diamond was discovered during a routine inspection of the Premier Mine in Pretoria, South Africa.  The diamond weighed 1.33 pounds and was called the 'Cullinan' diamond.  It was the largest diamond ever found at that time in history.  The Cullinan diamond was presented to Britain's King Edwards VII as a birthday gift from the Transvaal provincial government.


King Edward entrusted the Cullinan diamond to Joseph Asscher, the head of Asscher Diamond Company of Amsterdam.  Asscher had cut the famous 971-carat Excelsior Diamond found in 1893.  It's said that he studied the Cullinan diamond for six months before attempting to cut it.  Asscher cut the diamond into nine large stones and about 100 smaller ones.  The largest is called the 'Star of Africa I' or 'Cullinan I' and it weighs about 530-carats!  Both Cullinan I and Cullinan II are apart of the British Sovereign's Royal Scepter and the Imperial State Crown.  They are on display in the Tower of London. 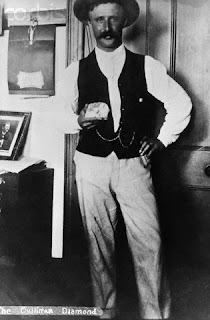 (Here is the uncut Cullinan diamond)
Posted by lefty at 9:31 AM