On August 3rd, 1958 the U.S. nuclear submarine Nautilus accomplished the first undersea voyage to the geographic North Pole.  It was also the world's first nuclear submarine.  The USS Nautilus was constructed and designed by U.S. Navy Captain Hyman G. Rickover who was a brilliant Russian-born engineer.  Rickover had joined the U.S. atomic program in 1946, and in 1947 was put in charge of the Navy's nuclear propulsion program.  Rickover succeeded in creating a nuclear submarine years ahead of schedule, the submarine was launched in January of 1954.

USS Nautilus departed Pearl Harbor, Hawaii on July 23, 1958 to embark on "Operation Northwest Passage" which would be the first crossing of the North Pole by submarine.  The 111 man crew and 4 civilian scientists accomplished this on August 3, 1958. 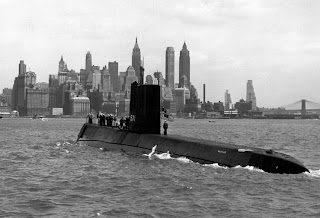